Edinburgh’s Old Town district is undergoing a radical transformation. Spearheaded by Allan Murray Architects in collaboration with Artisan Real Estate, the former Caltongate area is now New Waverley, a mixed-use urban community designed as a pedestrian-friendly district that will breathe new and vibrant life into this historic city district.

New Waverley is a master planned urban community in the heart of Edinburgh. The first phase of the development which was initiated more than ten years ago, is now nearing completion, and marks the beginning of an era of revitalisation for a part of Old Town that has until now been neglected. The £200 million development is in the process of completely transforming the area. Already the project has completed 400 hotel rooms, for an Adagio Aparthotel and two Whitbread hotels. 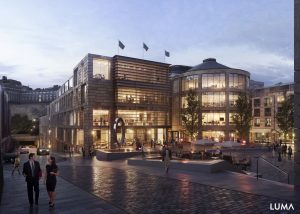 The 7.5-acre site that comprises New Waverley is located on the city’s historic Royal Mile. The rich history of this area is the perfect contrast—and complement—to the contemporary architectural design that is the hallmark of New Waverley. New Waverley is a mixed-use urban development, with small sections of affordable housing as well as plans for retail space, restaurants, several hotels, and over 200,000 square feet of office space. In addition, a new public square is under development. Along with the new construction, a number of historic buildings are earmarked for refurbishment. Already, a row of 19 Victorian arches have been converted into a retail district, and a total of 45 affordable homes have been completed, with plans for another 148.

This new project is all about accessibility and walkability. When the master plan for New Waverley was in development, accessibility was at the forefront of the list of essential features, with half a dozen points of pedestrian access for the area, and numerous footpaths connecting different points within the district.

The heart of New Waverley is its central square, which will serve as a pedestrian-friendly public area, surrounded by mixed-use spaces. The square is planned as an anchor for the new and refurbished retail, dining, and leisure options, office spaces, hotels, and apartment-style homes.

The award-winning architectural and urban design firm Allan Murray Architects is based in Edinburgh, and brings its keen understanding of the city to every project. With a philosophy that focuses on innovating public spaces in urban environments, Allan Murray Architects combines environmental concerns with the development of urban spaces that are rewarding and joyful.

In this endeavour the firm is aided by its use of ARCHICAD, the BIM platform that makes model based design accurate and intuitive. And since ARCHICAD is number one when it comes to large-scale projects, it’s the ideal platform for the 7.5-acre New Waverley development.

CEO Allan Murray said: “We are delighted to now see the fulfilment of the first phase of the masterplan for the area, which we initiated over a decade ago. This development has galvanised the revitalisation of a sadly neglected but very central part of the Old Town, within a World Heritage Site setting. The mixed-use project interweaves high quality new build with the refurbishment of historic buildings and creates a bold new urban public realm for the benefit of the local community”

After ten years in planning and development, New Waverley is finally under construction, and after the completion of phase one, is already winning awards and garnering plenty of attention. New Waverley won the Herald Property Award for Commercial Property of the Year in September 2017, in recognition of the work on the Adagio Aparthotel and The Arches. The award completes a trio of awards for the development, after winning the UK RICS Regeneration Award, and top honours at the Scottish Property Awards.

New Waverley has been planned as an urban area where people can work, live, and enjoy leisure time in a variety of different ways. And a large number of people will soon be working in New Waverley, thanks to the UK government’s new plan to move up to 3,000 jobs to the area. The government will take over 190,000 square feet of office space in the new development when the project is completed in 2019. The office space is designed with sustainability and operational efficiency in mind, with a modern interior and amenities that include a landscaped roof area for employee use. 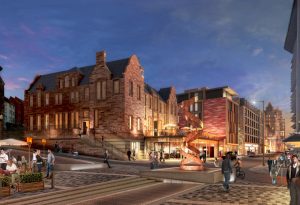 The hard work that Allan Murray Architects and Artisan Real Estate have put into the project has already paid off, even before the completion of the second phase of development. The government’s decision to move thousands of jobs to the district proves that the impact of the New Waverley project has been recognised at a national level.

Currently, New Waverley is regarded as one of the most significant city centre rejuvenation projects in Europe. The fact that it’s centred around Edinburgh Old Town—a historic World Heritage Site—means that the project is of particular importance for the city, but is also significant on a wider scale as many other European cities seek to modernise without sacrificing the integrity of their historic districts.