Approached by client Aviva Ireland in 2015, Lafferty Architects were presented with a brief to design a Grade A office building to the highest architectural and environmental standards.

Zurich House was redeveloped as part of a masterplan to upgrade and improve the Blackrock Estate in a village location on the edge of Dublin.

With splendid views across to Dublin Bay on one side and the Dublin mountains on the other, the site borders the main highway through Blackrock. 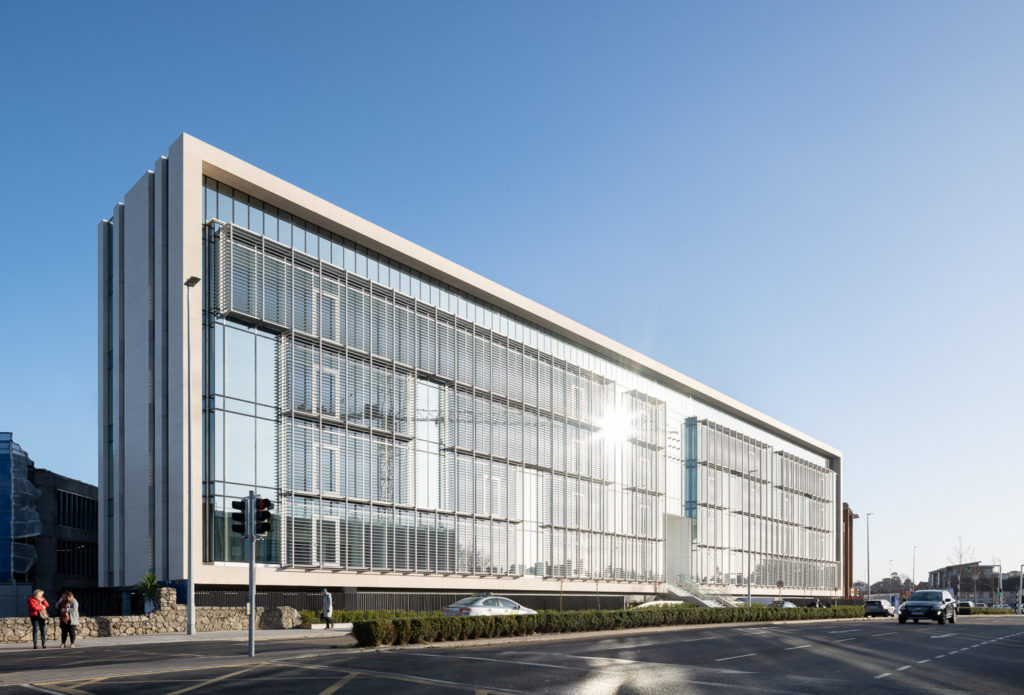 With the help of thoughtful architecture, Zurich House now stands proudly, making a strong statement with its striking brise soleil on the front elevation, while its brick finish sits comfortably within the context of Blackrock village to its rear.

Zurich Insurance occupied the 1980’s building when it was previously known as Enterprise House. Zurich, at the time, decided more space was needed and played with the idea of looking for a new location.

Three possible options were initially discussed: a light touch upgrade, an extension, or to demolish the existing structure and rebuild. After detailed investigations, the client chose the third option.

Lafferty Architects explained how Archicad was their go-to. The Archicad model was used in a presentation, along with CGIs created in Lumion. The approval was secured with thanks to the software, and it was clear that expressing their design intent would have been difficult without the tools.

“We modelled everything in Archicad right from the start. We went to Zurich to present to their board and they loved it.” – Oliver Nolan, Director at Lafferty Architects

The design concept was to create a bold and innovative statement for the local authority and to deliver a building that both enhanced its surroundings while not overpowering the traditional village location.

Oliver mentioned that stakeholder management was a key element throughout the project. The redevelopment of the building meant that staff were temporarily relocated for two years.

From the client, to the tenant, to the local authority, the Archicad model played a critical role in expressing design intent and achieving the necessary financial, planning and practical support.

“We relied on the Archicad 3D model to show the planners how the building would look and to explain the key design concepts. The local authority was quite responsive to the building and we worked alongside the planners to make some small tweaks to the design to help secure planning permission,”

A key part of the building design was the anodized aluminum brise soleil. The building faces south, but tenants expect full glazing and unrestricted views.

From conversations with the tenants in the previous building, Lafferty Architects knew that when the sun was low in the sky during the winter months, there was a major problem with glare into the building.

To address this, they decided to make an architectural statement with an elegant stone-framed façade incorporating floor to ceiling glazing together with a striking brise soleil.

Lafferty Architects worked with specialist glazing contractor GIG Fassaden. By modelling the impact of the brise soleil on the internal office space, the team could decide which glazing would be needed to enable the building to meet its energy performance targets and achieve its LEED Gold rating.

“We wouldn’t have been able to model the brise soleil without Archicad. Using the curtain walling tool, we were able create the complex profiles to design an exact representation of what was finally built. The model for the façade was precision accurate so we knew exactly how everything would fit together before the contractor was involved,”

The benefits of BIM throughout

The team imported both the complex structural engineering and the MEP models directly into Archicad.

Oliver admitted that this did cause some challenges due to the models being so big, but thankfully overcame them. The great benefit of implementing BIM was that the team were able to coordinate effortlessly, so the design phase went smoothly.

For example, Archicad was very useful to manage the ducts and services and to make sure they weren’t taking up valuable height within the building.

Working on an office building, there is always pressure to deliver height. The old 1980’s Enterprise House lacked in this area, and the goal to deliver a Grade A office space meant height was crucial to meet this. 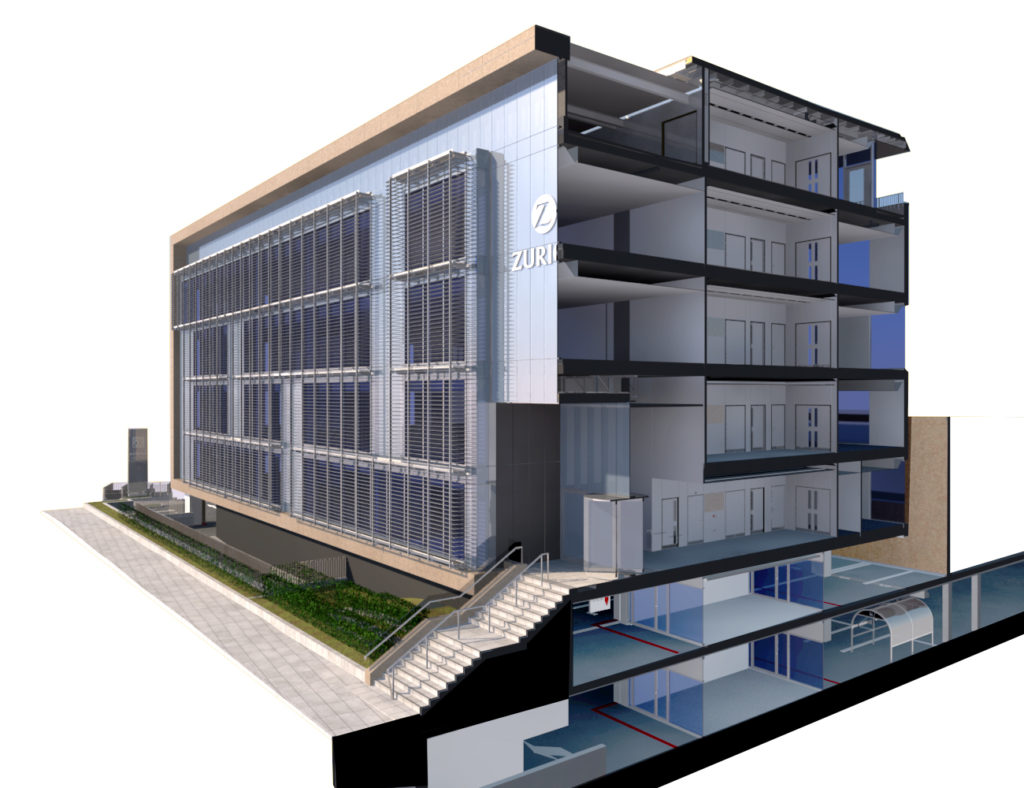 Typically, the local plan involved height limitations, so Lafferty Architects were working with some strict constraints.

“We used the cut-out sections within Archicad to quickly explain to Zurich and show the current floor to ceiling height, compared to the new building.”

The construction phase was also complex as the team was working on a very tight site bordering the road on one side and Blackrock Shopping Centre on the other. To add to the challenge, the building was positioned over an existing car park which remained functioning throughout.

Lafferty Architects modeled the existing building in Archicad first and then used the renovation tool to add the new building into the model. This meant the team could communicate easier with the contractor and show exactly which parts of the old building should be demolished, and which should remain. This was a great benefit for Lafferty to complete the project on time.

“The Archicad renovation filters were very helpful in particular with one area which was very tricky regarding the demolition. This was the side adjacent to the shopping centre which stayed in situ. With the renovation tool, we could easily show the contractor exactly what elements needed to be removed and what needed to be retained,” explains Oliver.

Throughout the 22-month construction phase, Lafferty Architects used GRAPHISOFT’s award-winning BIMx tool to communicate the plans with the contractors.

From the fluidity of the process, it is clear to say that BIMx was a great help. Oliver had explained that giving the BIMx model to the contractors helped show them what needed to be done, with less effort.

“This helped immensely with our communication, it meant we had a lot less questions to answer. The whole construction process was so much faster with the help of BIMx,” says Oliver.

The project was completed on time and on budget in December 2019 with office staff moving back in during the summer of 2020.