It’s official: Kettle Collective’s Lakhta Centre is now Europe’s tallest building, even before construction is complete. Designed by award-winning British architect Tony Kettle, the Lakhta Centre, located in St Petersburg, Russia, will be a multi-use building with office space as well as leisure facilities and a public observation deck.

About the Lakhta Centre

Ironically, the Lakhta Centre will replace another newly-completed building, the Changsha IFS Tower T1 in Hunan, China as the 11th tallest building less than a year after the 452-metre-tall Changsha building claimed the title itself.

The Lakhta Centre is more than one of the world’s tallest buildings, as its poured-concrete foundation entitles it to another claim to fame. The foundation was poured in 2015, and on its completion date of March 1 was registered by the Guinness World Records organisation as the world’s largest continuous concrete pour. With 19,624 cubic metres of concrete, the pour beat the previous record-holder, the Wilshire Grand Tower, by more than 3,000 cubic metres.

Once complete, the interior public areas of the centre will be designed by Exclusiva Design Srl Bureau in a futuristic style in keeping with the building’s ecologically advanced construction. 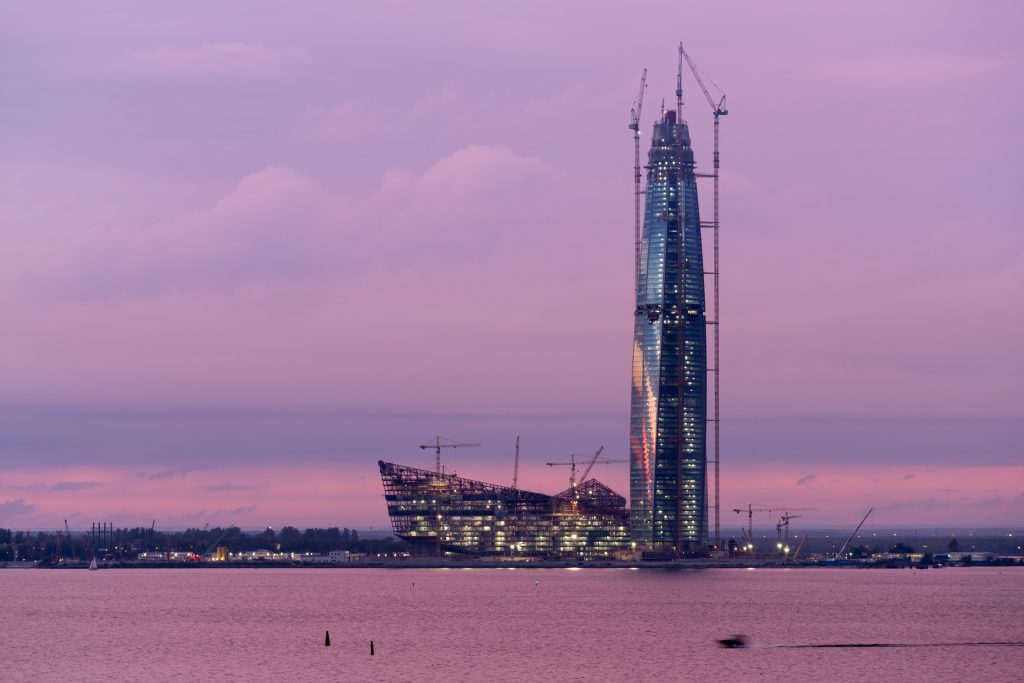 Upon completion, the Lakhta Centre will become the new home of Russian gas corporation Gazprom, as well as its many subsidiaries. The project has been more than five years in the making: Gazprom initiated the project in 2012, and construction began in 2015. The 330,000 square metre skyscraper will house 86 floors when complete, along with an elaborate viewing deck at the tower’s pinnacle. The Lakhta Centre is slated to be more than Gazprom’s corporate headquarters: the building will also feature an outdoor amphitheatre, a sports centre, a conference centre and exhibition space, and a children’s science centre.

The construction is expected to revitalise the former industrial area, located on the bank of the River Neva around 12 kilometres from the centre of St Petersburg.

The Lakhta Centre has been designed with incredible attention to detail, particularly in terms of energy-saving features that will make it one of the world’s most ecologically-friendly skyscrapers. Kettle Collective refers to its unique environmental strategy as a “fur coat” that maximises the value of daylight hours, minimises heat loss, and makes the building more energy-efficient even in the harsh extremes of the local climate. Among the environmental and energy-saving initiatives planned for the building are:

Approximately 100 technical innovations have been designed for use in the Lakhta Centre, which will collectively reduce the building’s energy consumption by around 40%. It’s estimated that it will take just 20 years for the energy savings to allow Gazprom to recoup its investment in these technologies.

The Lakhta Centre is also designed to exacting safety standards, with the tower core surrounded by 10 supporting columns. Even if all 10 columns collapse, the entire building will still be supported by the central core. In addition, the Lakhta Centre has been designed to high fire safety standards, with the ability to withstand a fire of up to four hours duration without sustaining structural damage.

The inception of the Lakhta Centre dates back to November 2005, when Gazprom announced its intention to build what was then known as the Gazprom City Business Centre. Initially, the firm of Robert Matthew Johnson Marshall Ltd was contracted to build the centre. In 2007 the project was renamed the Okhta Centre, and after a period of delay, in 2010 the entire project was relocated, and again renamed. Eventually the project became known as the Lakhta Centre, and Tony Kettle’s studio Kettle Collective was contracted for the design.

Tony Kettle’s unique five-sided twisting tower design takes its inspiration from two primary sources: a pair of centuries-old fortresses that once dominated the local landscape, and the interplay of natural forces such as light and water.

Landskrona was a 14th century Swedish fortress that once occupied the original Okhta construction site. Along with Nyenschantz, a five-sided fortress that dates to the 17th century, Landskrona serves as part of the inspiration behind the design. The second source of inspiration was a natural one, focusing on the way in which energy, light, and water interact with one another to produce reflections and refractions. These two disparate sources are melded together to produce a design that is classic and is at the cutting edge of modern at the same time. 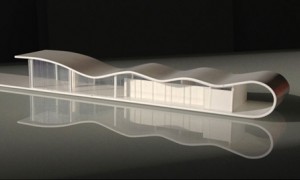 Naturally, model based software has played an important and continuing role in the design and build of the Lakhta Centre. And in fact, Kettle Collective have already been recognised for their stellar work with ARCHICAD. Not only did Kettle Collective win the ARCHICAD project of the year in 2015 for their work on The Ripple Retreat, the project also won the Royal Scottish Academy Open Exhibition Staff Selection Award for Architecture. Kettle Collective have also won a substantial number of accolades and awards since it was founded in 2012 by Tony Kettle and Colin Bone. In just a few short years, this unique design studio has established itself as one with a strong commitment to innovative and forward-thinking designs that positively influence the communities in which they exist. 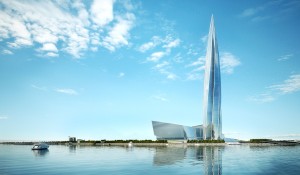 ARCHICAD is a key feature of what the Kettle Collective excels at: designing incredible buildings. ARCHICAD is a feature-heavy programme that really shines on large-scale projects especially when utilising Teamwork amongst design team members. Its superior level of performance means that literally no building, even the 11th tallest in the world, is too large or too complex. The use of ARCHICAD simplifies the design process in a wide range of ways that make the development of such large-scale projects more accurate and more intuitive. The ability to develop a 3D digital model and fully test that model even before a building’s foundation has been laid provides an immense benefit in any construction project, but on large-scale projects such as the Lakhta Centre the advantages are incalculable.

Kettle Collective tends to focus on designs that complement and enhance the local environment, rather than dominating or substantially altering it. Another key feature of Kettle Collective designs is sustainability, and the use of local resources. All of these factors have been utilised to the fullest extent possible in the design and construction of the Lakhta Centre, and it shows in both the advanced design of the building, and in the long list of innovative environmental features it harnesses.