HLM Architects Glasgow studio approached the task of designing a landmark scheme for the Royal Hospital of Sick Children and Department of Clinical Neurosciences, which offers 1,800 rooms across 50,000 square metres. 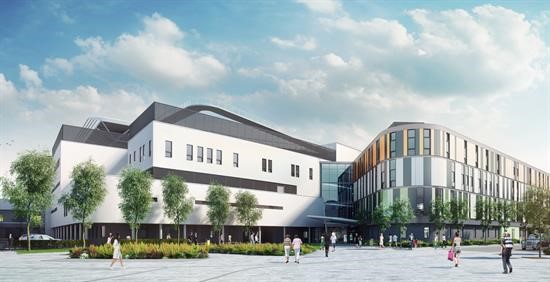 The architects designed the structure to include a large atrium, shop and café, with a stunning skylight linking both entrances. The intent was to create an inclusive environment for both young and older patients with all levels of physical and cognitive ability.

Being HLM’s largest project, the complexity required the team to embrace UK Building Information Modelling (BIM) Level 2 from the outset.

“The biggest project that we had actually delivered in BIM was Bradfield Secondary School, which had been delivered from the Glasgow office. Although [that] was much smaller, all we were doing was scaling-up. The model was broken down into smaller parts and all of the processes that you go through are the same,” – Lorraine Robertson, Associate Director

HLM Architects had developed a ‘PIM’, or Project Information Model, throughout the design and construction process, and so adopted a ‘full BIM Level 2’ working environment. Consisting of structured graphical and non-graphical information, the PIM was held in a shared online space to allow access to necessary parties.

The team’s design software of choice is Archicad, and, being more than familiar with the software, they had authored their graphical information models using Graphisoft’s award-winning Archicad. 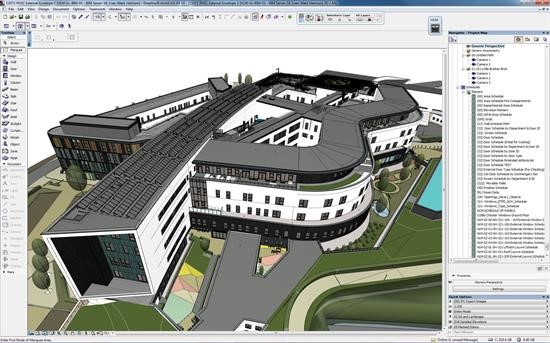 The Model Manager of HLM would receive graphical informational model files from across the design team and supply chain and combine these into one model for analysis in design meetings, which helped develop the PIM over time.

Mark Harrison, BIM Co-ordinator and Architectural Technologist at HLM Architects, explained how the process worked: “All of our drawings are produced in the 3D model, in Archicad. The majority [of the data] is then exported as PDFs or Excel spreadsheets which are uploaded to the CDE.”

Mark also went on to explain that the use of PDF or Microsoft Excel format ensured information was accessible to all tiers of the supply chain.

Healthcare schemes are often complex, requiring advanced mechanical and electrical illustrations and plenty of equipment, making sense of this project being an incredibly data heavy model. To overcome the difficulty, the team rarely loaded up the full model, instead choosing to work from smaller, much more manageable segments, allowing the team to take in specific information for which segment they were presently working on.

“Our external envelope model alone is 12GB, and the internal upper and lower models are four to five GB each. So if you’re working with the internals team they don’t necessary need all of the room loading equipment in there or the landscaping information. So we hotlink in the various parts of the model to suit their needs and what they are working on.”

Developing the detailed design in a BIM environment has seemingly generated a robust information model that is standing-up to scrutiny on site. 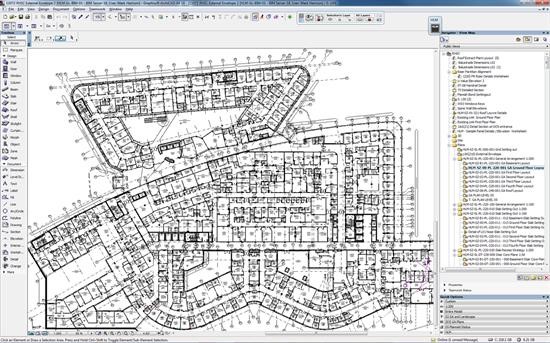 The external envelope model was 12GB alone, and the internal upper and lower models being 4-5GB each.

“When you were working in 2D environments and you were asked to produce drawings, you would tend to do them through easier parts of the building. You can’t do that with BIM. Everything needs to be worked through. There’s less corrective work to do when the job is on site. The building has been built in the model first of all then thoroughly examined before they strike a blow on site.”

Projects of large size and importance will always come with a long gestation period. In this case, the period stretched over a fairly critical time for UK BIM process development and one in which technologies moved on significantly.

HLM had decided to evolve their standards and software platforms within the project.

“We’re told that once you start a project you’re meant to stay at that particular version of Archicad as you’re going through. Now on a project the size of this you can’t really afford to do that as everyone needs to develop with the software.”

The project arrived at HLM’s practice in 2011. Had they stayed on the version of Archicad they were using at the time, the practice would now have a significant number of employees using Archicad 15, while others had progressed to the later releases.

Despite the project being underway, the team bit the bullet and ensured staff continued to learn and grow with the product. 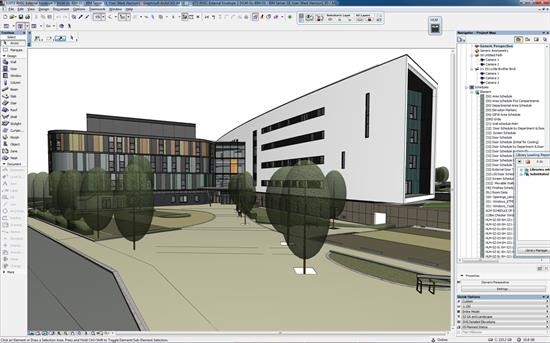 Paul Tunstall had noted that regularly upgrading the software was very beneficial for interoperability, as the IFC links between Archicad and other software was not as strong as it is today, which also gives great reason to upgrade yearly.

HLM Architects explained that Archicad’s team-working capability is a major benefit over other software, especially when working on such a large scheme where communication and exchange of information was regular, and crucial.

Faced with such a complex and high-profile project, the team firmly believe that working in a BIM environment improved collaboration, reduced risk and increased the rate of design iteration.

The experience has greatly benefitted the practice, being able to use knowledge earned from this scheme to pass on to future projects and also to teams in their other offices.

“It’s meant a huge team of people in the office all working really closely together to deliver a project that I think we will all be very proud of.”