Award-winning, London-based studio Penoyre & Prasad were asked to design a new Learning and Teaching Centre for Brunel University in London, to encourage peer-to-peer and team-oriented learning.

The original Brunel University Lecture Centre, designed by Richard Sheppard and John Stillman, was completed in 1968. Now a Grade II listed building, it famously featured in the 1971 Stanley Kubrick film A Clockwork Orange. The imposing concrete building dominates the site, housing six large lecture theatres and a collection of smaller lecture theatres and classrooms in a single block.

Brunel understood that, while traditional lectures are vital in university education, they could unlock a potential of new ways of teaching students with a new space entirely for this. To fit a new learning space into the building would have posed quite a challenge, having traditional lecture theatres being an important part of the building and no flexibility to change this, Brunel had decided a new building was needed. 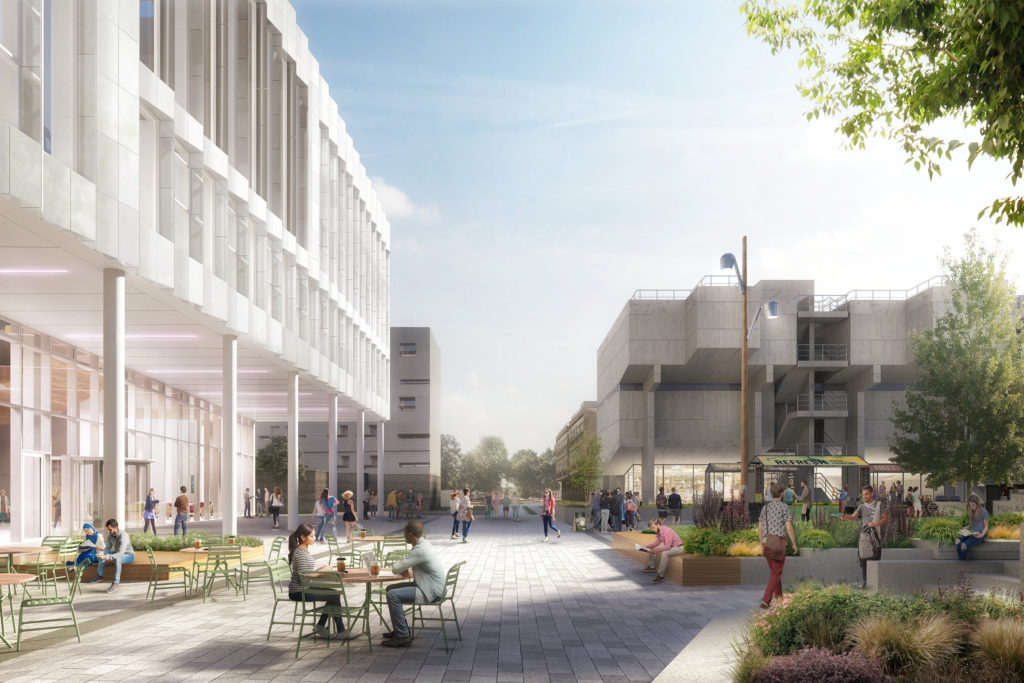 Brunel wanted the new Learning and Teaching Centre to be a counterpoint to the Brutalist Lecture Centre. The brief was that the centre should prioritise peer-to-peer learning, but also offer room for changes in teaching methods over the next 30-50 years.

The team entered the design competition for the project, following an initial consultation process that was just three weeks long.

Penoyre & Prasad mentioned that with the ability to quickly model in Archicad, they were able to invent many ideas before finally creating their winning concept. They also made great use of GRAPHISOFT’s award-winning mobile communication tool BIMx during the competition stage, while also impressing their client when walking them through the model.

“We used Archicad from day one and it played a big part in helping us win the design competition.” – Michael Fostiropolous, architect at Penoyre & Prasad.

After winning the competition, Penoyre & Prasad undertook an intense consultation period which meant balancing many different stakeholder requirements at the university – for example, the differing needs of students and teachers.

One challenge that arose was that the building needed to be built fairly high – due to the new building’s small footprint – at seven storeys. As a result, and with masses of people coming in and out of lectures every hour, it was vital to keep the circulation flowing.

To address the challenge, the building is designed around a central atrium and ‘living stair’ – a central timber staircase designed with the intent for students and teachers to socialise in the space. Using this layout, there are no corridors; instead, a deliberately fluid space that allows students and staff to congregate in the social spaces that are dotted around the central atrium. Formal teaching areas are reconfigurable thanks to sliding, folding walls which allow for smaller spaces to be interconnected, comfortably accommodating from 40-250 people in a single space. 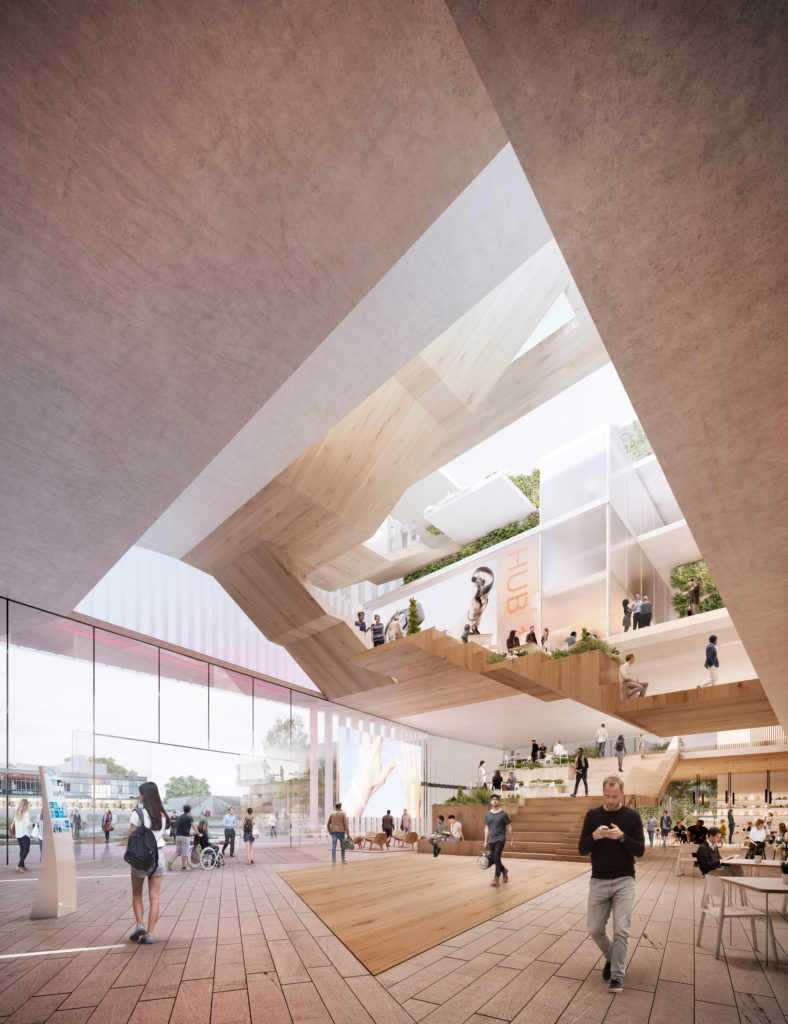 The staircase and attached seating are both made of timber, designed to give a more inviting and homely feel to the space, with planting and soft furnishings providing a finishing touch.

Penoyre & Prasad worked closely with the university’s accessibility team to ensure everyone would be able to utilise the living stair, using BIMx to develop ideas and designs.

“We met with the engagement committee, which represents different groups at the university, once a month. We always had a BIMx model on the projector and used it to look at the implications of that particular discussion. There was always something in the model that we could use to help people visualise what we were talking about.”

The planning department was determined to preserve the appearance of the existing building and to not be overpowered by the new learning centre. Penoyre & Prasad worked around this by offering a lightweight and transparent building, contrasting the listed block.

“Once again, both BIMx and the fly-through movies produced from Archicad were invaluable in helping us demonstrate to the planners that the new building would enhance, rather than overshadow the adjacent listed building.”

With help from landscape architects Oobe, Penoyre & Prasad reimagined the central Quad between the two buildings to bring them together. Using green space, lighting and furniture, the architects had created a more accessible and inviting space for the end users.

Penoyre & Prasad put Archicad to work in a craft-focused way to design bespoke ceramic panels for the building façade. The 3D geometry of the panels was widely complex, but with thanks to Archicad’s slab and column elements, the team could quickly test configurations and model all 5,455 individual panels without making the model too big.

Michael at Penoyre & Prasad had explained how they teamed up with ceramicist Lydia Johnson of Fettle Studio, who is also an Archicad user, to create a selection of natural glazes which gave the façade a stunning pearlescent effect. After coming to an agreement with the designs, an industrial manufacturer based in Germany produced the panels.

Information was shared via IFC with the manufacturer. Penoyre & Prasad also produced 3D printed façade mock-ups as a tangible example for the client consultations.

It was clear to see that the Archicad model had helped demonstrate not only its design intent, but also the buildability of the scheme with specialist consultants.

Brunel University is very focused on BIM protocols, and the employer’s requirements set a target of BIM Level 2 for the Learning and Teaching Centre.

“This meant a challenging and rigorous process which included creating COBie outputs for each discipline and mapping Archicad objects to COBie data structure. We used Uniclass classification throughout and every pipe and structural connection has been fully modelled by our engineering colleagues at BDP.”

Once building starts, it is expected to be completed within two years, with Penoyre & Prasad involved in the construction phase to assist the client. 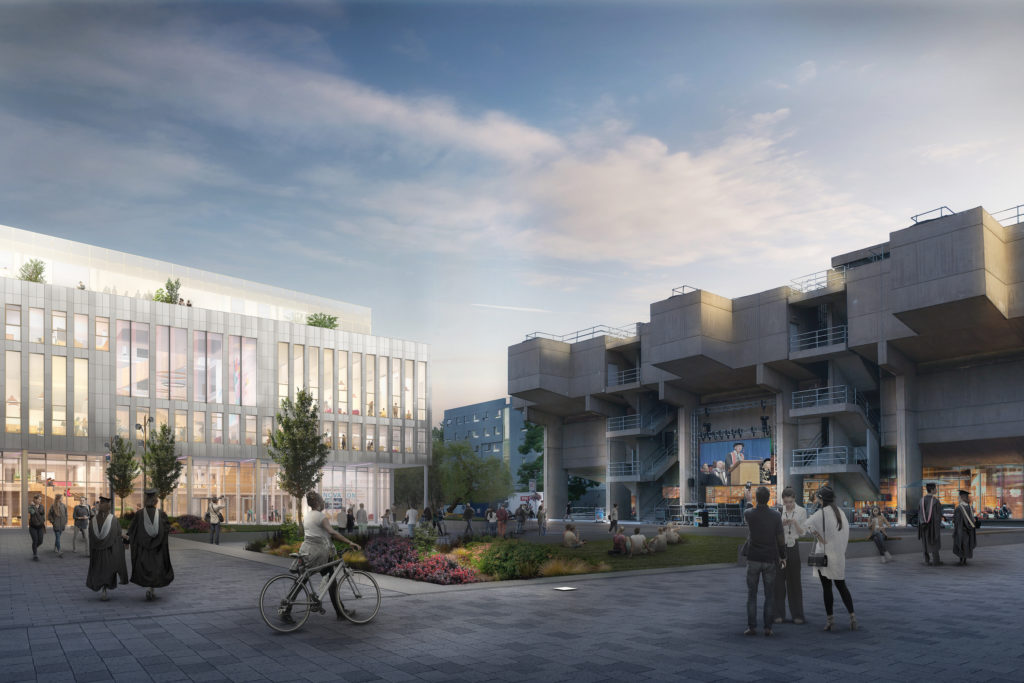 “We will continue to use Archicad and BIMx throughout the construction phase and we expect both the Archicad model and BIMx to help win hearts and minds with the team and subcontractors. It makes a huge difference at site inductions for suppliers and contractors to be able to see in advance what they are creating.”