Train stations are busy places where on any given day you can find people rushing to get to work at the start of a new day, or homeward bound at the end of one; people greeting one another hello, and people making their goodbyes.

They’re so busy, in fact, that we rarely get the chance to notice just how stunningly beautiful some of these places are. Here, we take the opportunity to commemorate the best in station design: our top 4 list of the best-designed of Europe’s many train stations. These designs combine the best of form, function, and utility, demonstrating the importance and the benefit of designing to the needs of users.

Belgium’s Liege-Guillemins station was built by Spanish architect Santiago Calatrava, and officially opened in September 2009. Fifteen thousand people per day travel through this incredibly dramatic space, which ranks easily as one of the world’s most memorable train stations. An undulating 32-metre-high steel-and-glass canopy covers five platforms that total more than 145 metres in length.

The addition of the canopy made it possible to build a station that is entirely without vertical walls, and that contributes to an incredible feeling of height, light, and space. During the day, the interplay of light and shadow through the canopy creates further interest, while at night, the station itself lights up the landscape.

Opened in 1852, King’s Cross Station is one of London’s best-known and loved landmarks, which ensured a mighty challenge for designers John McAslan + Partners (JMP) and Arup when it came time to redevelop and modernise the structure for the twenty-first century. As part of a £500 million restoration project, an older extension, built in the 1970s, was removed from the front of the station, and replaced with an arching plaza of steel and glass, with a stunning mezzanine balcony of granite and white mosaic tiles.

Along with the restoration of the building’s original frontage and roof, the addition of the sweeping plaza has not only revitalised the station, but has kick-started a renaissance for the entire King’s Cross district: adjacent land is also being redeveloped, with new homes, offices, and roads planned for the area.

Located in Innsbruck, Austria, Nordpark Cable Railway was designed and built by Zaha Hadid, the ground-breaking British-Iraqi architect who was dubbed “Queen of the Curve”. Hadid’s trademark were her stunningly futuristic and organic designs, which are brought to life in four stations that serve the northern Innsbruck mountain chain. The railway’s design reflects its surroundings, with natural ice formations serving as the inspiration.

While the design of each station is subtly different—an approach intended to adapt the form of each station according to its altitude—the overall theme is one of smooth, seamless movement that flows organically from one station to the next. If travelling is about the journey just as much as it is the destination, travelling via the Nordpark Cable Railway is a real treat.

Barneveld Noord Station is located in Rotterdam in The Netherlands, and is a spectacular example of what can be accomplished when a strong commitment is made to innovative modern design. Unlike other stations in our top 5 this one isn’t located within the city centre, and is definitely on the smaller side. Barneveld Noord is nearly 3 kilometres from the city centre, and with just one platform, plus a park-and-ride facility, it may seem that it’s no impressive enough to warrant a place on the list.

However, in terms of its forward-thinking design, and the out-of-the-box material choices, it’s more than deserving. The station was designed by NL Architects, and consists of a glazed waiting room, atop which are arranged reclaimed shipping containers that mark the spot with an eye-catching design. The shipping containers provide storage space as well as a stark but pleasing design aesthetic, and the design and execution of the station serves as an excellent reminder of what can be achieved with recycled materials.

From February, find us near King’s Cross Station

King’s Cross Station was built between 1851 and 1852, the fifth London terminus of the Great Northern Railway. Over more than a quarter-century of use the station has been modernised and refurbished several times, but never more dramatically as in its most recent incarnation, which has combined old and new to award-winning effect. In 2014 the station’s main train shed roof and historic south facade were both restored to their original nineteenth-century appearance, and solar panel arrays were installed along the roof. In the meantime, the new departures concourse, designed by John McAslan + Partners (JMP) and Arup, had already been completed and opened to the public in 2012.

The project was more than a decade in the making, having begun in 1998 with the restoration of the five buildings that line the western side of the station. These buildings are now housed by the steel-and-glass construction of the departures concourse entrance hall. This eye-catching design is a semi-circular vault of criss-crossing beams, anchored by columns that arch upwards in a sweeping design to envelop the space. At 7,500 square metres, the concourse is Europe’s largest single-span station structure. 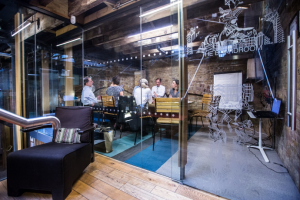 The parcel of land between King’s Cross and St. Pancras is also under redevelopment, with 2,000 homes, nearly half a million square metres of refurbished office space, and new roads planned for the area.

From next month, we’ll be at a new Central London office space adjacent to King’s Cross Station. We’ll be offering localised events and training courses for all ability levels, at a convenient location in an elegant and strikingly renovated warehouse.