Applecore Designs would like to congratulate Archicad users Mikhail Riches for winning the prestigious RIBA Stirling Prize award for their project Goldsmith Street.

For 50 years RIBA awards have been recognised industry wide as being a hallmark of excellence in architecture. The RIBA regional and national awards culminate to create a shortlist of projects that are then considered for the RIBA Stirling Prize. The very best of architecture is celebrated regardless of the type, scale and budget.

The shortlist was considered one of the most diverse contender lists with projects ranging from an art gallery to a major transport interchange and including a Scottish whiskey distillery, a Leicestershire opera house, a council housing project and a house made of cork. The final shortlist came from 54 RIBA National Award winners and are outlined below:

From the way that Cork House experiments with entirely plant-based materials, to Goldsmith Street’s ultra-low energy affordable homes, each of these six buildings pushes the boundaries of architecture, exceeding what has been done before, and providing solutions to some of the most pressing challenges of our times.

Half of the design teams shortlist featured there for the first time – Feilden Fowles Architects; Matthew Barnett Howland with Dido Milne and Oliver Wilton; and Mikhail Riches with Cathy Hawley. The other half were no strangers to the list with Witherford Watson Mann and Rogers Stirk Harbour & Partners being previous winners and Grimshaw a previous shortlist contender.

The shortlist as a whole epitomised the global reputation of UK architecture according to the then RIBA president Ben Derbyshire. He went on to say:

“The ambition and commitment of the clients who commissioned the buildings is remarkable and sits at the heart of their success. Given the fact the UK faces the worst housing crisis for generations and a global climate emergency, we must encourage their architectural ambition, innovation, bravery and skill”.

The final winner was announced on 8 October 2019 and was the energy efficient Goldsmith Street by Mikhail Riches with Cathy Hawley. The first-time winners produced the Norwich City Council project which comprised of 105 low energy dwellings and was described by the judges as “a ground-breaking project and an outstanding contribution to British architecture”. Newly appointed RIBA president Alan Jones said the project was a ‘beacon of hope’.

Goldsmith Street in Norwich is near to the centre of the city and was designed to be an alternative to high rise apartments still giving affordability and high density. Within space of one hectare the composition of the project is seven terraced blocks ordered in four rows with 45 houses and 60 flats.

The project has been built to Low Carbon Passivhaus standards and as such each property faces south which maximises solar exposure. It is understood that the site is the largest social housing scheme to achieve Passivhaus status.

With an aim to improve communal space over a quarter of the site is committed to this with an alley which runs through the centre which also doubles as a communal garden and play space for children. The overall aim is that children can play safely without being near to access roads etc. Future maintenance requirements have been made easier by giving front door street access to each flat by way if their own staircase and lobby situated at street level.

Winner Mikhail says that much of the success is down to the “vision and leadership” of Norwich City Council. They were both supportive and committed to the project and held the belief that council tenants should have access to great design.

“It is not often we are appointed to work on a project so closely aligned with what we believe matters; buildings people love which are low impact. We hope other local authorities will be inspired to deliver beautiful homes for people who need them the most, and at an affordable price.”

Comments from the judging panel which was chaired by Julia Barfield heralded the project as a ‘modest masterpiece’ and high-quality architecture in its purest most environmentally and socially-conscious form. Behind restrained creamy facades are impeccably detailed, highly sustainable homes which is an incredible achievement for a development of this scale. 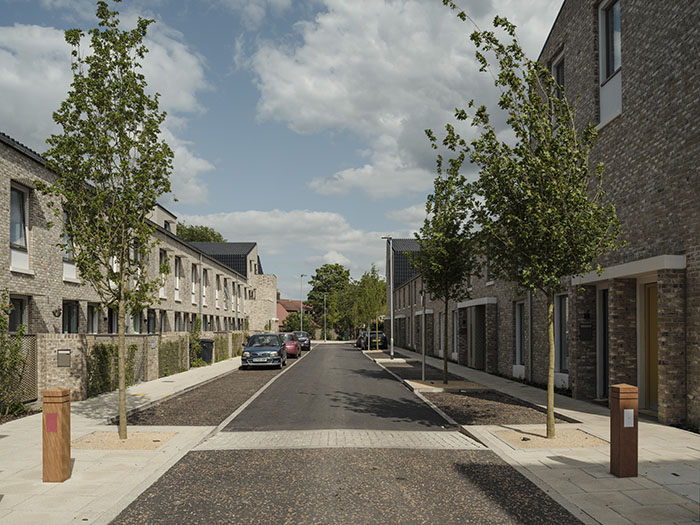 Awarded every year since 1996 the RIBA Stirling Prize recognises buildings that have made the most significant impact to British architecture. This year marks the first year that the prize has been awarded to a social housing project. The Goldsmith Street project also won the inaugural Neave Brown Award for Housing.