A 10-year long project by John Robertson Architects has resulted in an impressive and modern office space which not only boasts one of the capitals biggest roof gardens but also achieved a BREAAM Excellent rating. 33 Central not only fulfils a practical purpose but also showcases sustainable design and construction.

The building was originally constructed in the 1980s and the then owners asked JRA to carry out a feasibility study for a full refurbishment. Following this it was decided to demolish and re-build. The rebuild plans included increasing the space available for let by 65% and yet with fewer floors. The new building would also have a roof garden which would provide views of the City of London, Canary Wharf and the River Thames. The site was then sold in 2013 to developer HB Reavis who then hired JRA to create a detailed design and deliver the whole project.

As sustainability was a big priority for HB Reavis they requested that the size area earmarked for the roof garden be increased. The 30% increase in space made way for 9000 plants from 55 native species. 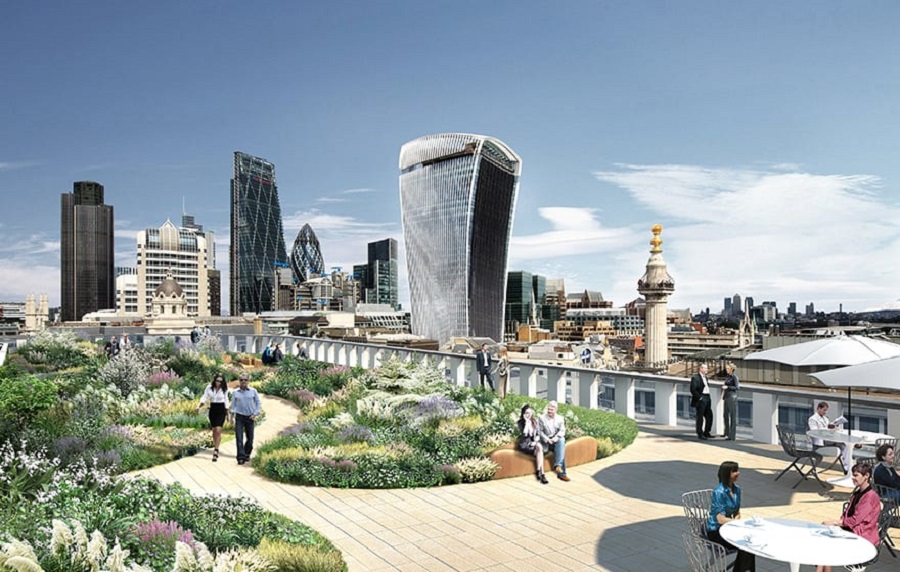 It was important that the new building complemented those around it. Notably 33 Central has the Grade 2* listed Fishmonger’s Hall and the art deco Adelaide House close by and so the end result needed to be comfortable in these surroundings.

Agnieszka Szedzianis who is an associate at JRA states that their aim was to create “a timeless design”. Due to the length of the project the building still needed to be considered contemporary when it was finally completed which is why this aspect was so important.

The existing building foundations were re-used which meant that the project could complete earlier and less materials needed to be transported into London. No excavation meant less cost, disruption and impact on the environment.

Initial designs were produced using ARCHICAD 10 and subsequently as time went on in ARCHICAD 15, 17 and 19 to take advantage of the latest software functionality

JRA produced the initial designs in ARCHICAD 10, and then re-drew the model in ARCHICAD 15, 17 and 19 as the years progressed, to benefit from the latest functionality in the software. Using ARCHICAD’s trace reference tool throughout the project meant that those working on the project from different countries and at different times could make sure the new model aligned with old versions and that everything was fully coordinated.

Agnieszka says: “The tool also enabled us to add two different contractor drawings to the model and to immediately see the different versions and what had changed.
“In addition, we used Profile Manager to model structure encasements and facade elements. Core and repetitive elements of details were drawn in separate files and imported as hotlinks or modules.”

The JRA team worked with and coordinated information with six different organisations. The team used BIM Level 1 and Level 2 throughout the design process. Working in 3D helped show important information such as complex junctions and movement joints and ultimately informed key decisions on the project.

“We provided information in both 3D and 2D including scale drawings of the model, which were produced directly from ARCHICAD. We also imported all drawings from the contractors into our model to compare with their proposals.”

JOIN OUR EVER INCREASING USER BASE
We share best practice architectural workflows. Sign up to our coreNEWS e-newsletter for information on model based design, BIM, events and training.