Based in New Haven, Connecticut, the architecture firm has revealed its design, approximately 1,083-foot-tall (330-meter-tall) skyscraper that will rise in Tokyo and is scheduled to be completed in March 2023. The building is one of three skyscrapers being designed by Pelli Clarke Pelli Architects for developer Mori as part of the Toranomon-Azabudai district in central Tokyo, where Heatherwick Studio is designing the public realm.

Planned to be approximately 330 metres high, the main tower would be around 30 metres taller than the Abeno Harukas skyscraper in Osaka – currently Japan’s tallest building.

“Out of our three projects on the site, the main tower is perhaps the most visual on the skyline,” said Fred Clarke co-founder and senior design principal of Pelli Clarke Pelli Architects.
“It is the first thing visitors will see upon arrival in Tokyo and is the tallest building in all of Japan,”

When it is completed in 2023, the Toranomon-Azabudai main tower will overtake the 258-metre-high Toranomon Hills skyscraper, which was also developed by Mori, to become the tallest building in Tokyo.

Crowned by four curved-glass petals on each corner, the Toranomon-Azabudai tower is expected to become a new landmark for the city. (Its height was determined as a complement to the neighbouring Tokyo Tower, an Eiffel Tower–inspired observation tower that measures about 1,091 feet tall—333 meters—as Japan’s second-tallest structure.)

It will also be a skyline indicator of its new neighbourhood, the ARK Hills development in Minato City, a 20-acre that includes two additional mixed-use towers, a shorter podium building with residential and office spaces, underground train connections, and a curvilinear and extruding public realm designed by London-based architect Thomas Heatherwick of Heatherwick Studio, which will be greened with a lush landscape of lawns, trees, flowers, and waterscapes.

One of the other towers on the site by Pelli Clarke Pelli is set to follow its companion and become the second-tallest building in Tokyo—the West Tower, at approximately, 863 feet tall (263 meters). 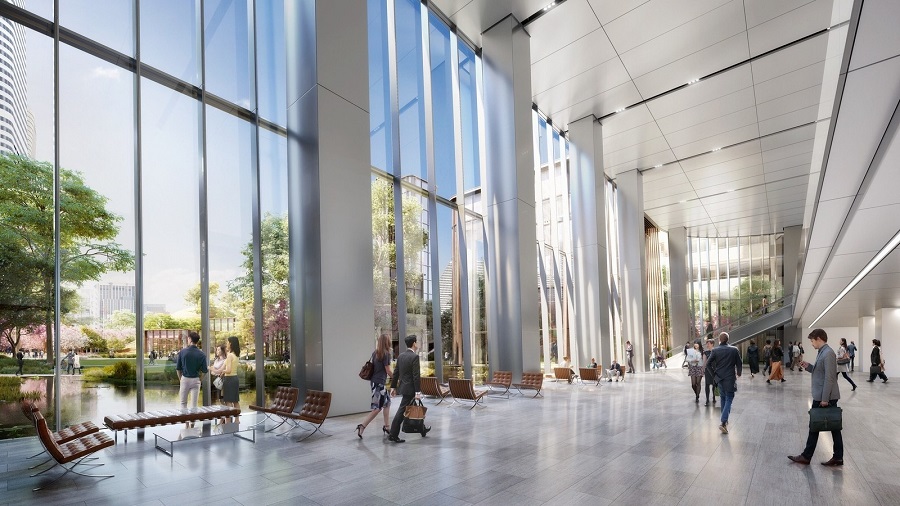 In total the district will contain 860,400 square-metres of building space, which will be occupied by offices, apartments, shops, a hotel, gallery space and a school.

The 64-storey main tower will mostly contain office space, with the retail facilities on its lower floors and 10 floors of apartments topping the building.

The other two skyscrapers will be predominantly residential. The east tower will contain 40 floors of apartments above a 120-room hotel, while the west tower will have 58 floors of residential above six storeys of office space.

All of the towers will be connected by an underground walkway, which will contain shops and restaurants.

The Toranomon-Azabudai complex is envisioned as

a “city within a city,” says Clarke, where residents can eat, work, play, and live. “Adding a positive note to the Tokyo skyline,” he continues, its towers “reach to the sky with a powerful gesture” as some of the nation’s tallest. Until, perhaps, the firm tops itself again.