Approved at appeal, ArchiWildish‘s EV Charging Station near Bourton-on-the-Water is not only the largest in the country, but in Europe. Mark Wildish of ArchiWildish explained how Archicad made the design process easier, also giving him the ability to portray his design intent more effectively.

The client wanted to pass on a sustainable and environmentally conscious business that would also be financially sustainable and helped cancel out his own carbon footprint that had accumulated through his career working within the HGV haulage business.

During discussions between Mark and the client, the idea of the EV Charging Station was introduced. At the time, it was thought that EV owners would charge their cars at home to commute to work, and to charge at work to return home, however this couldn’t be the case for those who regularly travel large distances for work. Naturally, this idea wasn’t a solution for all EV users back in 2017 and so became a barrier to mass adoption, but remained an opportunity for a successful business idea.

Despite the great concept and perfect location for the purpose, it was crucial that the delivery of the concept was performed well.

“Rather than try reaching out with the concept to the local authority and business partners, we would adopt a “build it and they shall come” approach, and apply for planning approval for the scheme that would then attract the appropriate attention and interest from the benefit of having a formal planning approval for such a scheme.”

Taking this approach however did mean they would be trying to sell a concept that went against the preached practice of owning and operating an EV at the time, as well as trying to tackle all the usual planning issues associated with a scheme of this scale.

This meant that the proposal would be visually intensive and require more images than usual to help sell the scheme both in terms of its planning merits and the general concept at large to a sceptical public.

Implementation of Archicad and CineRender

The site of the station has a significant drop in levels from the A429 in to the site. Rather than letting this be an issue, Mark decided to take advantage of the topography and proposed a sketch of a two-storey building which would appear as a single-storey when viewing from the roadside.

After the clients agreement with the principle of the design approach, an initial scheme using Archicad was made. 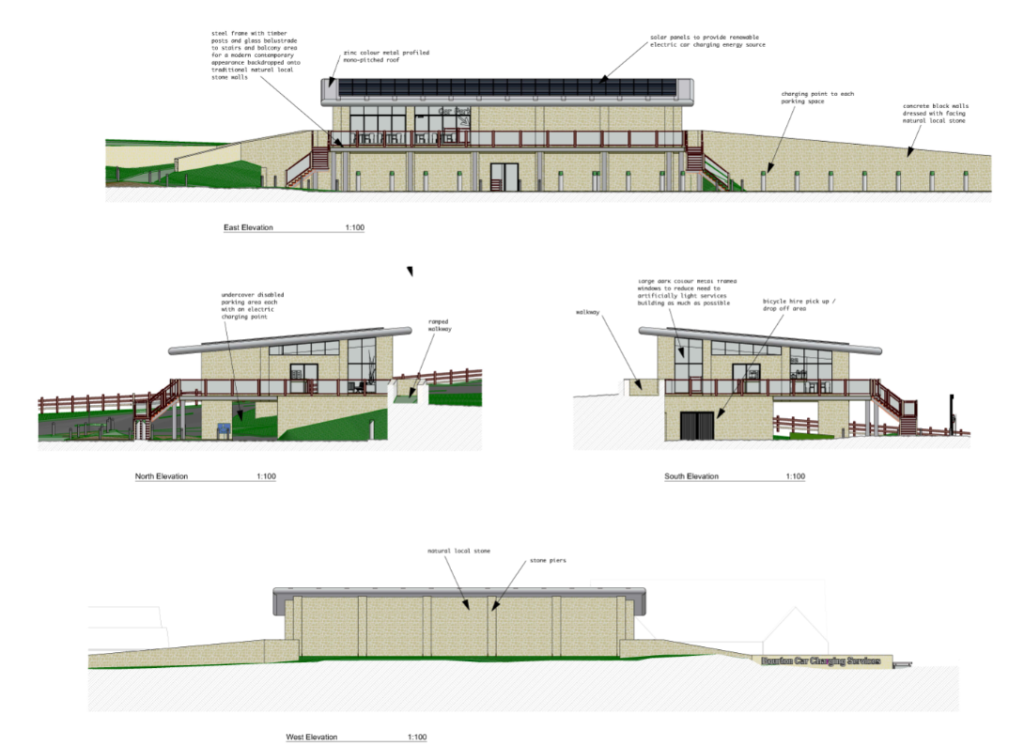 Mark had expressed that without Archicad, planning the layout of this scheme and taking advantage of the topography would have been much more difficult and a laborious task. By importing the DWG topographical survey, drawing a mesh over and inputting the levels, Mark explained how he was then able to work out and visualise how the road layout would work with sufficient height for vehicles to drive under the building.

“Thanks to the inbuilt CineRender software within Archicad, I was subsequently able to add detail to my initial design relatively quickly to enable me to present high quality visuals to my client to gain their approval of the design approach being taken.”

It is worth noting that while Mark did not make any substantial design changes, Archicad’s virtual building had made any slight tweaks needed, much more efficient and easier, especially when changing the curvature of the swept paths to ensure the design was compliant with highway requirements.

The planning application was a protracted 18 month process and was a divisive affair with a lot of local objection due to the misunderstanding that the proposal would result in a car park for tourists, as the picturesque Cotswold village of Lower Slaughter resides approximately 1 mile from the proposal site. However, the concept did receive support from the local MP and some District Councillors, they appreciated what the scheme was all about and could see how this infrastructure project would be beneficial in the near future.

Mark and his client had also met with the head of the Office for Low Emission Vehicles at the Department for Transport. The 3D visuals that were produced using CineRender were of significant help with this process as they amplified the explanation of how the site would operate, offering a quicker and clearer explanation than the traditional 2D elevations and floor plans.

It was a disappointment when, in November 2019, the application was refused at Planning Committee. The strength of local objection alongside the planning officer’s recommendation for refusal on Highway Grounds was a heavy influence on members of the Committee to follow suit.

The scheme was subsequently approved at an Appeal Inquiry in November 2020 with the District Council frustratingly having revoked their previous reason for refusal on Highway Grounds.

Having only worked on written appeal submissions before, this was the first time that Mark had been involved with a Planning Inquiry and this process involved the client appointing a Barrister, Planning Consultant, Highways Expert and a Landscape Consultant. The team were informed of the concept and plans, with the 3D visuals proving invaluable during this process. Mark explained how important it was during the process to have his team be fully supportive of the proposal, or ultimately weaken the appeal.

With the team on board for the EV Charging Station, they were able to withstand intense interrogations from the Planning Inspector and members of the Parish Council.

During the inquiry, the gradient of the ramped approaches into the building was questioned, claiming that it was not possible to achieve the requirements of Building Regulations, therefore proposing a scheme that was undeliverable. Thanks to the virtual building model, Mark was able to present a visual answer to the question, showing the ramps’ compliance with the Building Regulation requirements, also proving there was no reason present for refusal.

The next stage for the EV Charging Station

Since first submitting the planning application in 2018, Twinmotion had become available as an additional rendering/presentation tool that compliments Archicad. Mark had admitted despite still learning how to maximise the benefits of this exciting software, his initial experiments have been used to sell the concept of the EV charging station to perspective business partners and interested parties by the client. 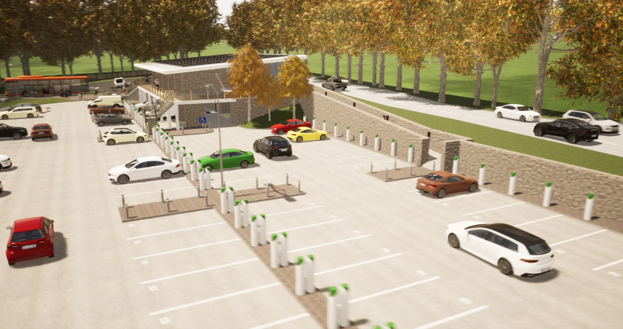 The animations showing cars driving in and out of the site and people using the facilities inside the building really helps to sell the concept in a way that static 3D images cannot achieve, it brings the scheme alive!

“Sharing information with the various consultants who will be assisting with this process is now made easier thanks to the multiple formats in which Archicad can export and import, such as converting my planning drawings to construction drawings. This means that a substantial amount of work will have already been started as we move into the next phase of the project.”

Mark is now in the process of discharging planning conditions with his client, and in discussions with contractors who will build the development.